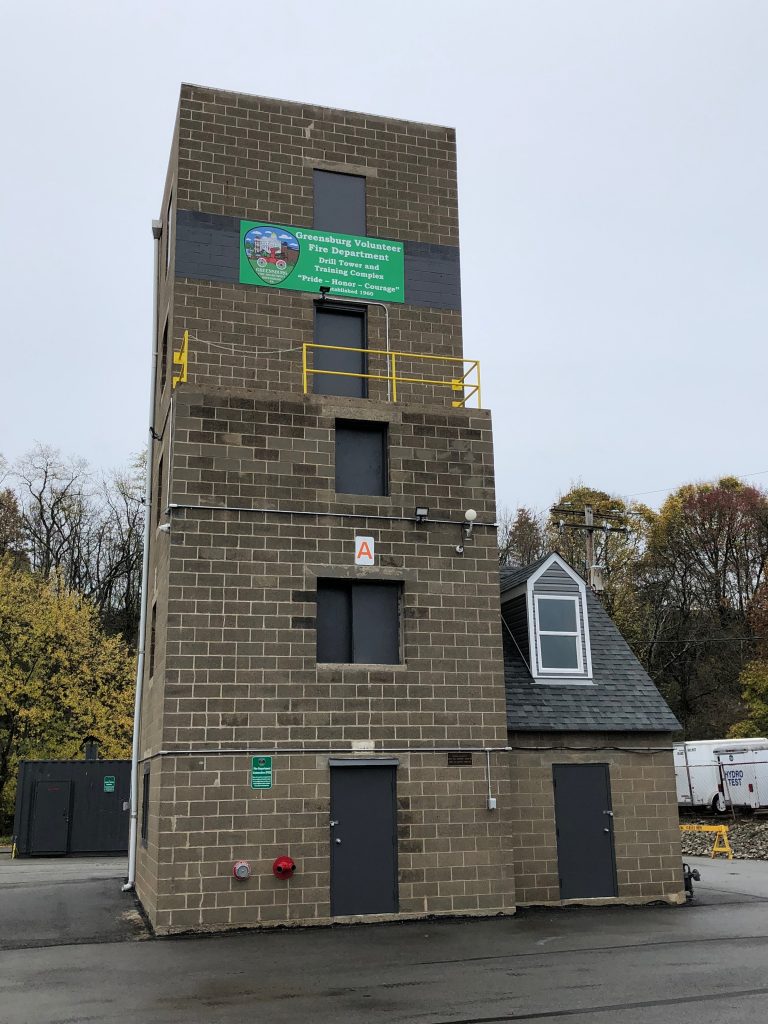 History of the Drill Tower

The following is an excerpt from the original dedication program

A new and welcome addition to the G.V.F.D. continual training program is this

Many different types of windows

conditions.  Heretofore, the streets and private buildings were used for

this purpose.  This was, of course, most unsatisfactory.

The following established courses are available and are taken by many fireman:

In addition, individual companies drill once each week.  The entire department has

a fire drill once each month.  And during the winter months, lectures are held

and demonstrations conducted by specialists in the field of firefighting.

The  “Training Tower” has been the crown jewel of our training facility for MANY years.  The five story tower was a joint project of the City of Greensburg, the Greensburg Recreation Board (on whose property the tower was built) and the GVFD.  Even with this backing, it would have been impossible to complete without the help of scores of businessman and other individuals whose contributions went to make this dream a reality.  With no funds available when the project was first conceived, upon completion, the estimated value was $25,000.00.  Practically, all of this amount was received in donations of money, material, and labor.  With many of the man hours of labor put in by the firemen themselves.  Over the last 59 years, this facility provided the firefighters of the Greensburg area with a training tower that was second to none!

In March of 2019, after a winter of extreme temperatures, we noticed that a large crack had developed traveling from the fourth floor repelling deck to a window opening on the third floor.   It was determined the affected area needed to be removed immediately before a catastrophic event occurred.  Upon receiving this information, it was decided that the remainder of the building be inspected for structural defects.  A thorough examination of the building revealed a majority of the mortar joints needed to be ground out and repointed and the entire structure needed to be sealed with a waterproofing agent.  This work was completed in June 2019 with a total cost of the project being $24,500.00.

In 2020 the GVFD training committee decided on enhancing our training facility to provide a safe, realistic experience for our firefighters.  During the initial inspection of the tower, it was realized that the structural components of the annex had become deficient and needed replaced.  After installing a new beam and bracing for annex floor we also installed 2 new windows, vinyl siding, and a shingled roof with flashing.  In the main tower the all the doors and windows were repainted, new safety chains were installed, the electrical components were upgraded, 3 “dummy” electrical panels were installed, and a new sign was hung on the front of the tower.  The final upgrade to the main tower was completed when Advance Fire Protection installed an LDH fire department connect, new sprinkler heads, and standpipe system to the first three floors.

The next areas that were improved were: erecting an adjustable pitch roof ventilation and wall breech mechanism adjacent to the drill tower, purchasing a forcible entry simulator/material cutting prop, constructing a modular self-contained breathing apparatus (SCBA) competency maze on the fifth floor, and installing a Conex live smoke container in the rear of the facility.  While there is not one device that solves all of our problems as firefighters, these props have a great potential to reduce the loss of life and property in the greater Greensburg area for many years to come.  Through hard work and generous donations, the GVFD was able to make this dream a reality.